Hello everyone! Sorry for another huge delay, but I hope we can make it up to you.
Well, since we wrote about flower prints back in 2014, we’ll try and cover other things – for instance, the sneakers (not the jeans, don’t worry, we won’t get down that route). 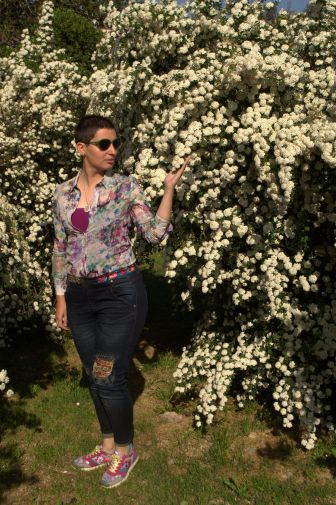 Anyway, it was a true spring day when we took these photos- The sun shone high, not a trace of wind, the flowers in bloom. Green all around. An all around happy go lucky feelings was almost palpable. Perfect place and time for a photo shoot!
Where better to start the adventure than with a bit of color? Purple flowers! 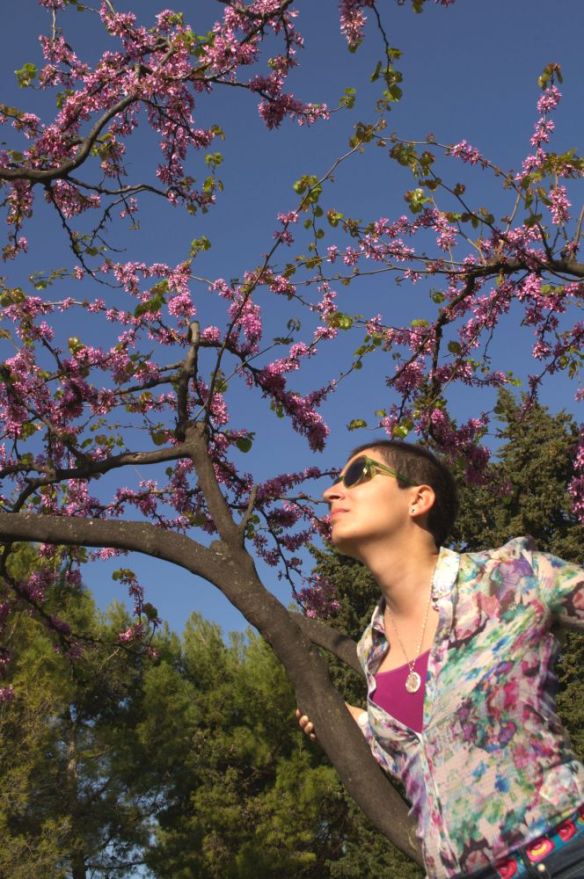 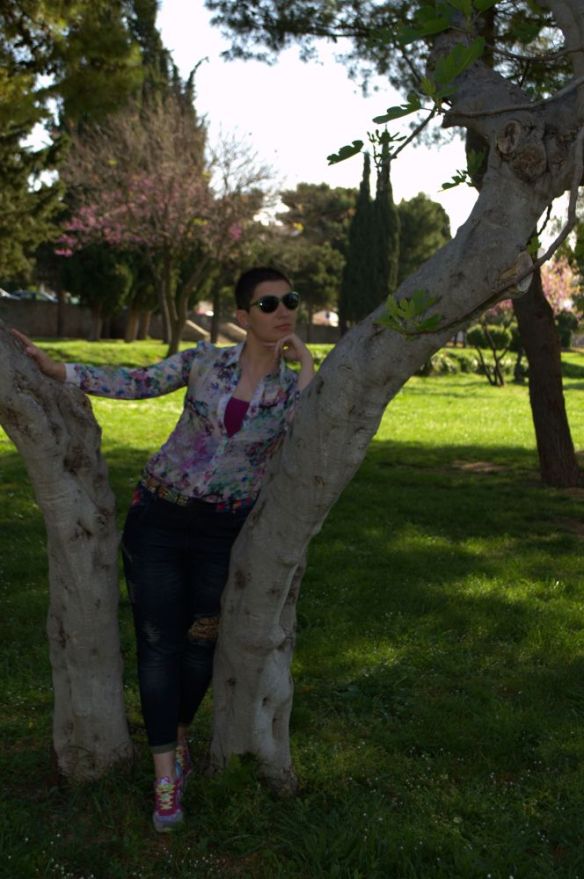 An unusually pensive mood as a counter point to vivacious colors of spring!

Enough with the trees, it’s time for some flowers! 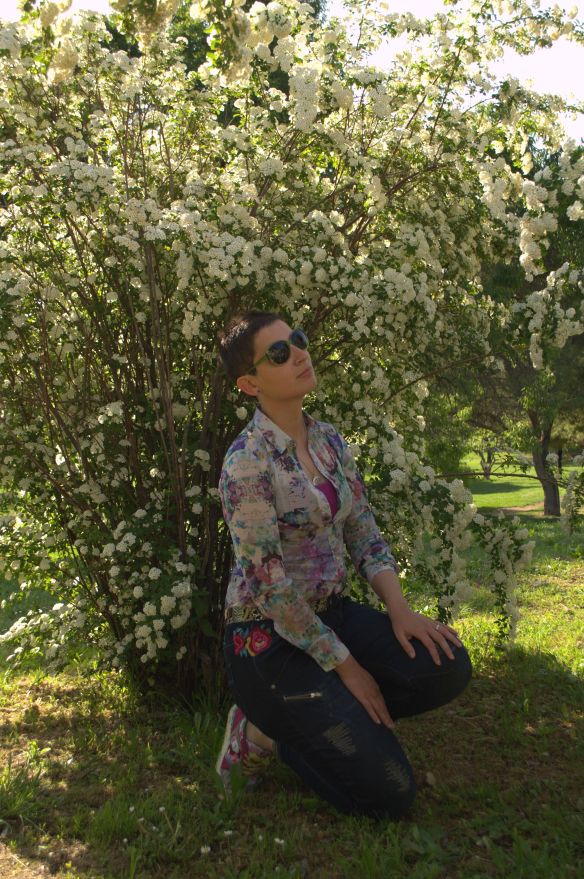 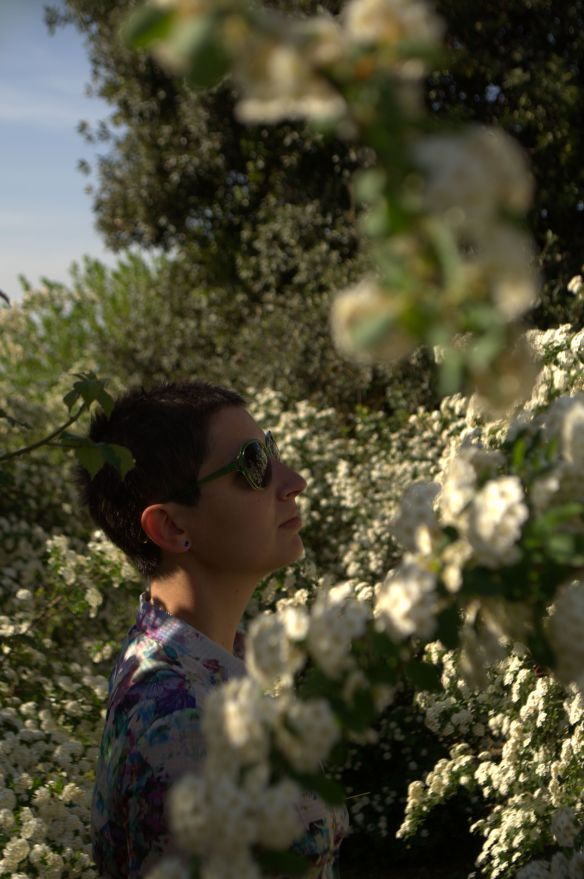 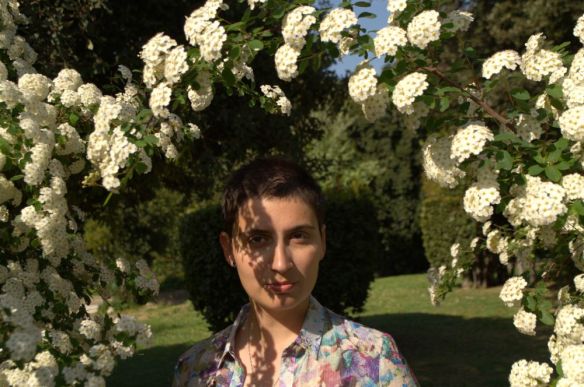 Let’s talk about the details a bit. We need something cheerful and happy to suit the current season. 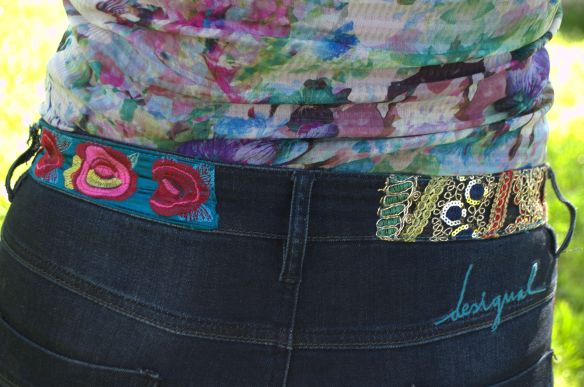 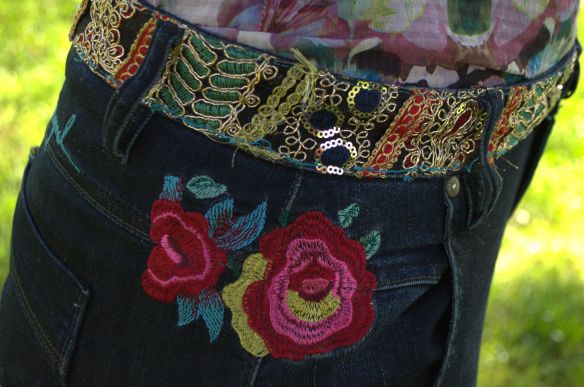 And now for the next best thing… 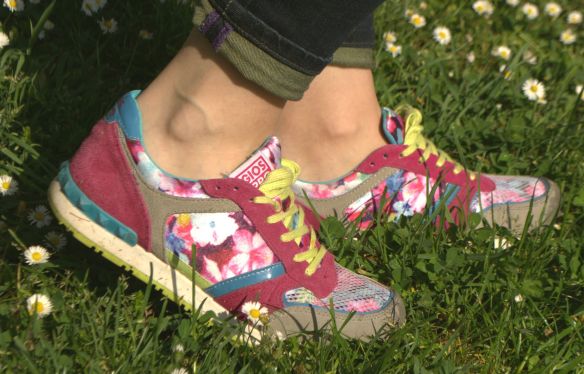 So, let’s learn something 🙂
A history of sneakers has been wonderfully written about on the Fact Monster web site (http://www.factmonster.com/ipka/A0932723.html), and we’ll just quote it:

Sneakers go back a long way. In the late 18th century, people wore rubber soled shoes called plimsolls, but they were pretty crude—for one thing, there was no right foot or left foot. Around 1892, the U.S. Rubber Company came up with more comfortable rubber sneakers with canvas tops, called Keds. By 1917, these sneakers began to be mass produced. (They got the nickname sneakers because they were so quiet, a person wearing them could sneak up on someone.)

That same year, Marquis Converse produced the first shoe made just for basketball, called Converse All-Stars. In 1923, an Indiana hoops star named Chuck Taylor endorsed the shoes, and they became known as Chuck Taylor All-Stars. These are the best-selling basketball shoes of all time.

Sneakers went international in 1924. That’s when a German man named Adi Dassler created a sneaker that he named after himself: Adidas. This brand became the most popular athletic shoe in the world. Track star Jessie Owens wore Adidas when he won four gold medals at the 1936 Olympics. Adi’s brother Rudi started up another famous sports shoe company: Puma.

During the first half of the 20th century, sports shoes were worn mostly to play sports. But in the 1950s, kids began wearing them as fashion statements. Even more teens followed the fad after seeing James Dean in sneakers in the popular movie Rebel Without a Cause.

Sales of sneakers really took off in 1984, when Michael Jordan signed a contract to wear a Nike shoe called Air Jordans—the most famous sneaker ever made. Even after Jordan retired from the NBA, his shoes continued to be best sellers. As companies like Nike, Reebok and Adidas competed, they changed the way sneakers looked, adding wild colors and doing away with laces. Sneakers began to be produced for every sport, including walking, skateboarding and “cross training.”

New sneaker technologies increase performance. Nike’s Air Force used little pockets of gas to create better cushioning, while Reebok introduced The Pump—air pumped into shoes to make them fit more snugly. Sneaker surprises continue: Spira Footwear, for example, has built a spring in the soles to reduce foot stress. Of course, innovations like these come with a price: Athletic shoes often cost more than $100 a pair!

Today, sneakers have outgrows their original purpose, and have become a lifestyle brand and much more than that. They are an integral part of modern culture, a powerful symbol of the footwear variety that has not gone out of style for decades, and probably won’t for decades to come.
Much has changed in the world of footwear. 60 years ago, nobody wore sneakers unless you waned to do sports. Today, this is certainly not the case.
20 years ago, you could buy one pairs of sneakers that were good enough for everything – today, if you ant to cover all bases, you have to buy city sneakers for everyday urban life, running sneakers, hiking sneakers, gym sneakers, basketball sneakers and so on.
Wanna proof?

And yes, this is just a fragment of it all!

They are very different. The color, the texture, the material, the shape… Yet, what is the one single thing in common to all sneakers? They are stylish. They are nice to look at. It wasn’t always like this. Remember the old 1980s and 1990s sneakers?

Would you wear this for coffee? Guess not!

While perfectly acceptable as footwear for sports, they are hardy fashionable enough for today’s standards. So, sneakers have become a footwear staple, comfy and good looking at the same time. There is no excuse to find that right pair of sneakers for you, a pair that is both tailored for your aesthetic taste and is wonderful to walk in. The choices are endless. Gone are the ways of chunky shoes. In a pair of sneakers, stylish + comfy go hand in hand, which is often not the case (high heeled shoes, anybody???).

Let’s take a look at some of the stylish celebs who wear sneakers that can easily be used for both sports and everyday wear: 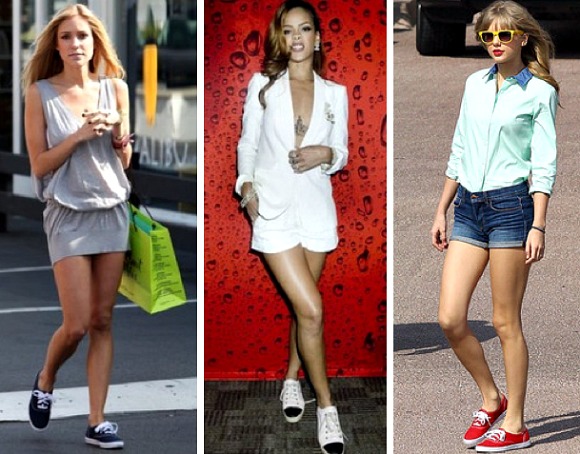 Celebs in their super stylish sneakers

Men footwear is expansive, and women’s footwear doesn’t lag. Special Ladies sneakers are the heeled variety, commonly known as the wedge sneakers, as we can see here: 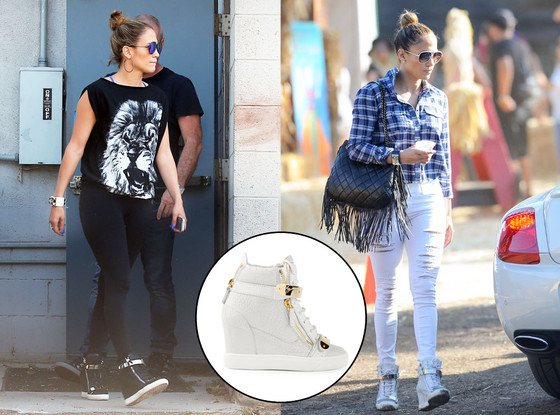 Celebs often work with brands to design their own sneakers. This has proved to be both a hit and a miss. For instance, we have this nice example in the collaboration of Rihanna and  Puma:

On the other hand, there is the collaboration between Kid Cudi and Giuseppe Zannoti. 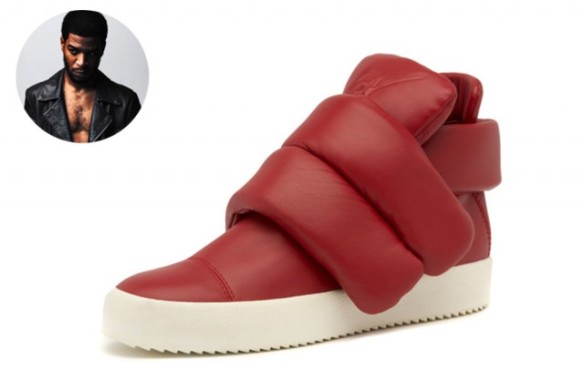 Do we need to say anything? Just look at it!

There are many other, wonderful and very colorful sneakers. Let’s take a look at them:

That’s it for now! See you soon!