So the best way to start a fashion blog is with some classics – little black dress and       black leather jacket are definitely a must items of every wardrobe….but besides them some of the items I consider classics are Dr Martens boots and unique handbags….

I’m a bit of the handbag addict..and proud of it….:)) One of my favorite bags is this one, Twiggy themed bag by the very talented Poppy Bags from Mostar…

I love 60s fashion, and both Dr Martens boots and Twiggy started to take over and redefine the fashion in the same year, 1966. Until this day they are widely recognized as promoters of English fashion.

Hangin’ next to the entrance of the once popular Split club Metropolis.

THEY are the boots that have horrified parents through the generations! At least my parents were horrified when I first bought my pair 14 years ago (best used pocket money)!
Dr Martens have been one of most recognized fashion brands since the 1960’s. The boots  were first invented by German doctor Klaus Martens who injured his foot and found normal boots too uncomfortable. He designed boots with soft leather and air padded soles.

British firm Griggs bought the brand in 1960, reworked the style, trade-marking the design with yellow stitching and chunky sole.The boots were first worn as footwear for the British working class with postman to policeman sporting the brand.

The 60’s , precisely 1966 also saw the first high-profile person wearing DM’s. Pete Townsend of The Who was seen wearing them onstage with pictures capturing the boots during his jumps and kicks around the stage.

Dr Martens AirWair was a massive hit in the 1970s but they were adopted by skinheads and the brand began to have a reputation of being associated with violence.
In 1976 a pair of Docs could be bought for £19.99 – today the average price is £100!!

Soon after the New Wave, Goths and in the 90s Grungers embraced the brand. This allowed Dr Martens to focus on being a way of rebellious self-expression.

After almost going bankrupt in 2003, the boots came back with even more styles and colors.

Dr Martens allow generations to show their personality and style. 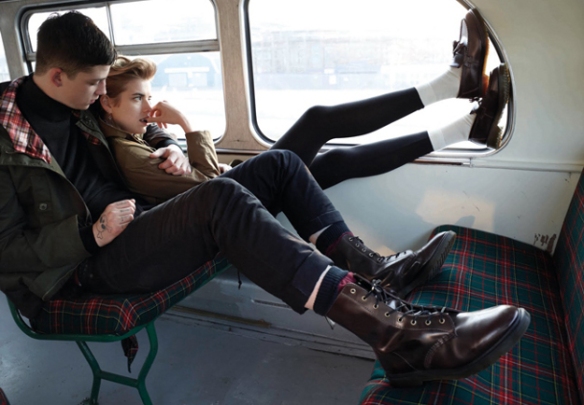 Lesley Lawson, known by the nickname Twiggy, is an English model, actress and singer. In the mid-1960s she became a prominent British teenage model of swinging sixties London and she best remembered as one of the first international supermodels.Twiggy was initially known for her thin build (thus her nickname) and her androgynous look consisting of large eyes, long eyelashes, and short hair.In 1966, she was named “The Face of 1966” by the and voted British Woman of the Year. Her fame had spread worldwide.

The Metropolitan Museum of Art’s 2009 catalogue of Style: Model as Muse Embodying Fashion stated that :

“Twiggy’s adolescent physique was the perfect frame for the androgynous styles that began to emerge in the 1960s. The trend was manifested in a number of templates: sweet A-line dresses with collars and neckties, suits and dresses that took their details from military uniforms, or, in the case of Yves Saint Laurent, an explicit transposition of the male tuxedo to women. ”

3 thoughts on “Made in England”