I love Freddie Mercury and Queen. No…I ADORE Freddie Mercury and Queen. I love so many bands and so many performers, but for me Freddie and Queen always were and always will be my number one. Love them or hate them, you cannot ignore pure talent and charisma from all of the band members. And what about Freddie? An epitome of rock star and true band front man. The Voice. Songwriting skills. Drama and flamboyance. The mustache 🙂 . He had it all. I would give my right arm in a blink of an eye for the opportunity, an honor to see them live…but without Freddie..I don’t see the point.

For this year carnival in my home town Split I decided to go as…well, you can guess…one and only, Freddie Mercury, darlings. I choose one specific outfit of Freddie which I particularly like – yellow jacket and white pants which he wore on his very last tour with Queen in 1986. Queen were on the verge of break up, but their unforgettable performance on Live Aid gave them new love for Queen and each other. Soon after, they recorded the new album, went on their biggest tour ever…and Freddie managed to make an opera album – all in two years span!

My friend Stela joined me as Freddie’s dear friend, Spanish opera singer Montserrat Caballe, and with my sister I tried to re-enact the famous picture of Freddie sitting on the back of no other than Darth Vader 🙂 .

We had so much fun, hope you’ll enjoy!

Miss Dee as Mr.Bad Guy himself and Miss Stela as Montserrat Caballe

Well who do we have here? Freddie and…Han Solo??? Or my husband dearest 😉 !

No, you don’t see double…

..I met another Freddie that evening – true Freddie overload!

Well…this is one interesting company, don’t you think so 😉 ? 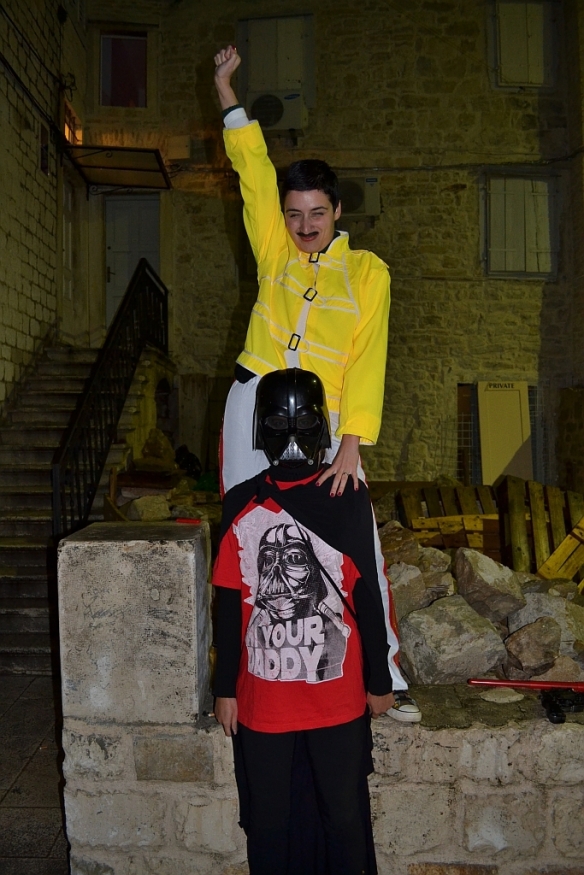 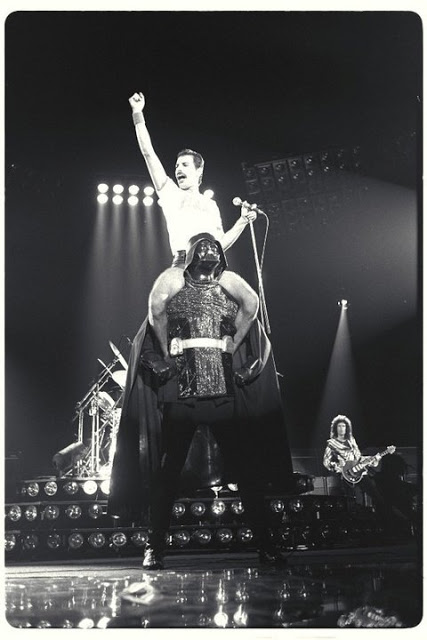 The Force is strong in this one!

One of Freddie Mercury’s most notable performances with Queen took place at Live Aid in 1985, held at Wembley Stadium in London, during which the entire stadium audience of 72,000 people clapped, sang and swayed in unison, eating from Freddie’s hands. Queen’s performance at the event has since been voted by a group of music executives as the greatest live performance in the history of rock music. The results were aired on a television program called “The World’s Greatest Gigs”. In reviewing Live Aid in 2005, one critic wrote, “Those who compile lists of Great Rock Frontmen and award the top spots to Mick Jagger, Robert Plant, etc all are guilty of a terrible oversight. Freddie, as evidenced by his Dionysian Live Aid performance, was easily the most godlike of them all.” 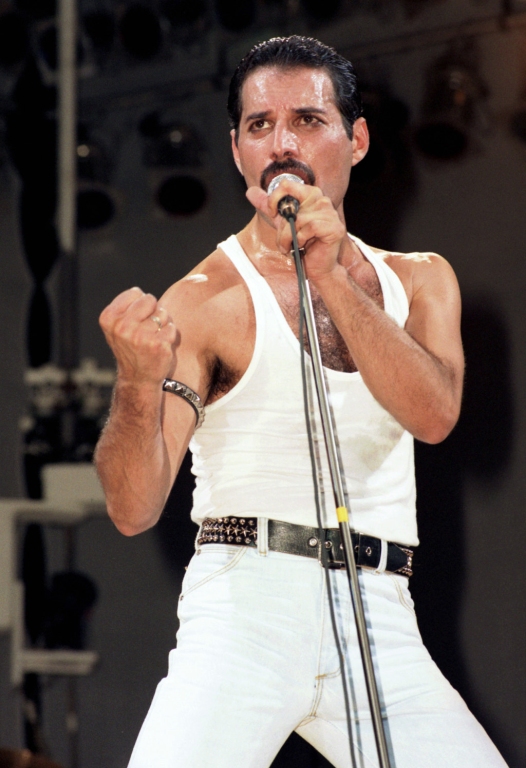 When interviewed for Mojo magazine the band said the most amazing sight at Live Aid was to see the audience clapping to “Radio Ga Ga”.

The band, now revitalised by the response to Live Aid ended 1985 by releasing the single “One Vision“, which was the third time after “Stone Cold Crazy” and “Under Pressure” that all four band members received a writing credit for the one song.

In early 1986, Queen recorded the album A Kind of Magic, containing several reworkings of songs written for the fantasy action film Highlander The album was very successful, producing a string of hits, including the title track, “A Kind of Magic”.

Queen could not book Wembley for a third night, but they did play at Knebworth Park. The show sold out within two hours and over 120,000 fans packed the park for what was Queen’s final live performance with Mercury. During the tour the band performed a concert at Slane Castle, Ireland, in front of an audience of 95,000, which broke the venue’s attendance record. 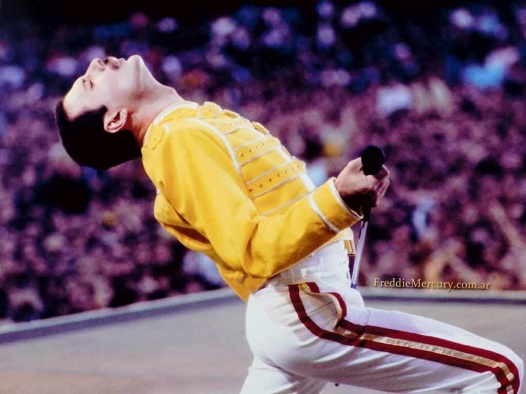 The band also played behind the Iron Curtain when they performed to a crowd of 80,000 at the Népstadion in Budapest, in what was one of the biggest rock concerts ever held in Eastern Europe. No one could guess that this tour would be their last.

Freddie’s second solo album, Barcelona, recorded with Spanish soprano Montserrat Caballé in 1987., combined elements of popular music and opera. Many critics were uncertain what to make of the album; one referred to it as “the most bizarre CD of the year”. The album was a commercial success, and the album’s title track debuted at the No.8 position in the UK charts and was a hit in Spain. The title track received massive air play as the official anthem of the 1992 Summer Olympics (held in Barcelona one year after Mercury’s death). 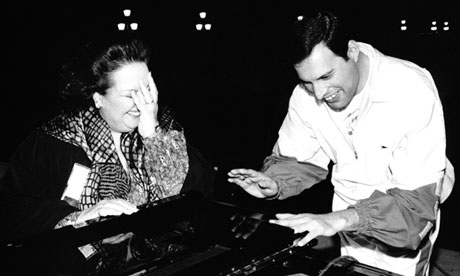 I love this picture of Freddie and Montserrat! 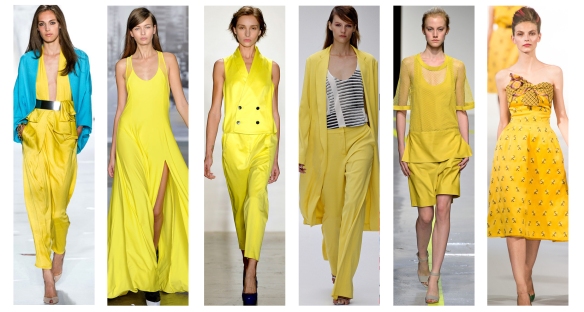 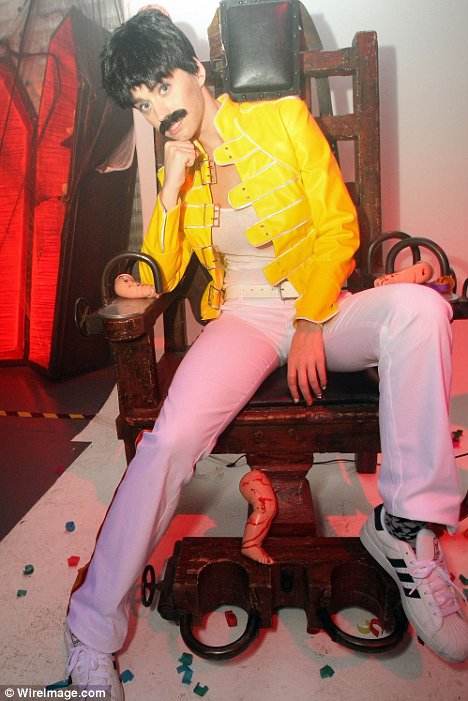 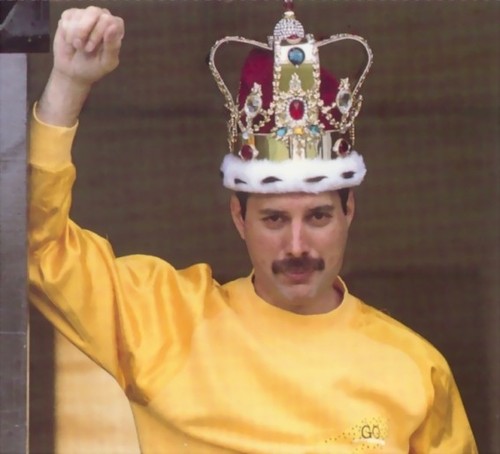 1 thought on “Are you ready, Freddie?”